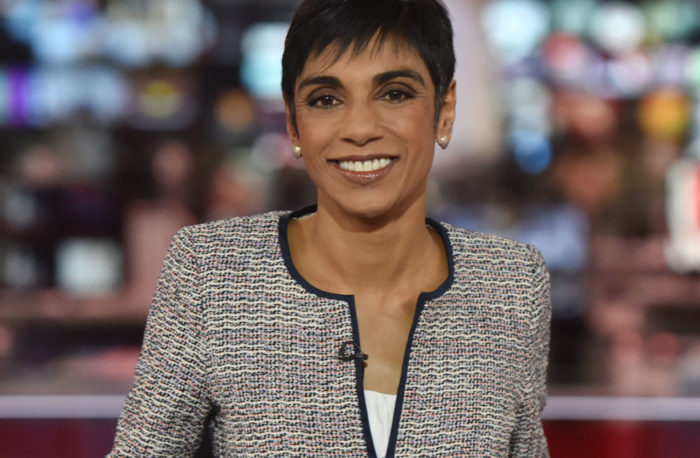 Reeta Chakrabarti is a BBC News presenter and correspondent. She presents the One, Six, and Ten O’Clock News on BBC1, and presents on the BBC News Channel. She also reports at home and abroad.

Reeta started out as a producer on BBC Radio 4, working on the Today programme, the World at One and PM before becoming a reporter on Radio 5Live Breakfast. She later became a general News Correspondent for television and radio, and then BBC Community Affairs Correspondent; covering the Stephen Lawrence inquest and Public Inquiry.

From 1999, she became a Political Correspondent for the BBC. She spent a decade at Westminster and covered three General Elections. In 2010, she became Education Correspondent and reported on the trebling of university tuition fees in England, and the introduction of free schools. She has covered a range of international stories, including in 2017 and 2018 the Rohingya refugee crisis in Bangladesh. She also reported twice from a rescue ship in the Mediterranean during the European migrant crisis of 2016/17. Reeta has covered international social issues such as attitudes to abortion in Chile and in Poland, the rise of female executives in India, and the trafficking of young women from Albania. She also reported in the summer of 2017 from Lahore and Amritsar on the 70th anniversary of independence in Pakistan and India.

In the 2019 General Election, Reeta was one of the key number crunchers in the BBC Studio, analysing the results as they came in.

Reeta is a graduate in English and French from Exeter College, Oxford. In 2018, she was made an Honorary Fellow of the College. In 2020 she became Chancellor of York St John University. Reeta is married and has three children.